In the run up to May’s Big Weekend in Norwich, Zara was invited to run a songwriting Masterclass for the BBC Radio 1 Academy.

30 participants and guest artist Ella Eyre – what was not to love? Afterwards, Norwich-based singer-songwriter Lisa Redford wrote an article about the experience. 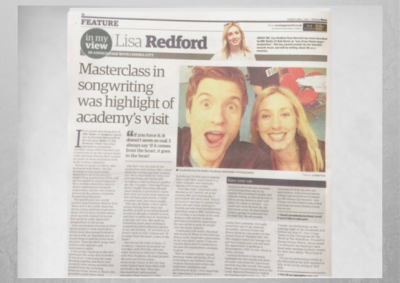 I had a great time being part of BBC Radio 1’s Academy who were in Norwich last month in the run up to Radio 1’s Big weekend. There was a fun atmosphere around the excellent venue OPEN Norwich and it was lovely to see the various Radio 1 DJs and team sharing their passion for music to those wanting to work in the creative industries.

Thanks to Access to Music, who partnered with Radio 1 for the Academy, it was particularly inspiring to get to be part of a songwriting masterclass. I love, and am fascinated by songwriting and have written extensively about it; about renowned and favourite songwriters, and my own creative process in the column I write for Songwriting Magazine.

The masterclass was run by London-based musical director Zara Nunn and it was really inspiring seeing young aspiring songwriters, many who’ve never written before, come up with original lyrics and then perform some impressive compositions to the group.

Zara encouraged everyone in their small groups to write down lyrics which were then passed to another group to edit, an important part of songwriting is making lyrics more succinct. Then the short songs were written with melodies and instruments added.

A fun group singalong at the end showcased the songs they’d written. It was lovely witnessing the songs blending together and there were certainly some strong melodies that resulted from the workshop. Musicians from Access to Music also provided a great house band.

Ella Eyre was also part of the masterclass and during a Q&A talked about her writing and what inspires her. She’s responsible for many cool collaborations and has written hits including co-writing Sigma’s number one hit ‘Changing’ featuring Paloma Faith.